The Bully Dog GT 40420 is a performance tuner AND monitor all in one compact electronic device! Get more horsepower, torque, and increase fuel efficiency in your truck with Bully Dog’s legendary tuning. All you need to do is plug the GT Tuner into your OBDII Port and perform a simple download to the vehicles ECU.
With industry leading features such as on-the-fly power level adjustments, safety defueling, and the exclusive Driving Coach, the GT Tuner is the premiere all-in-one tuner.  The GT Tuner gives you multiple power levels so you can maximize the power and efficiency of your truck whether you’re towing, daily driving, or on the track! The GT Tuner features a full color display with multiple themes and has a day and night time driving mode, so you can always quickly and clearly monitor important vehicle parameters. In addition, the GT Tuner can be used as a diagnostic tool giving you the ability to read and clear diagnostic trouble codes.
Bully Dog Driving Coach
Driving Coach is a special feature designed to help drivers drive more efficiently. It coaches drivers into better driving habits by providing real time visual and audio feedback as to how efficient a driver is driving. The driving coach also provides the driver with a "grade," on how efficiently they drove during a trip. This makes driving efficiently, constructive, and fun! Drivers can use the Driving Coach to coach themselves into improved driving habits. Every driver can challenge themselves to be "The perfect driver."
Parameters Monitored With Perfornance Gauge Function:
Real Time Fuel economy, Average Fuel economy, Trip Fuel economy, Load %, Coolant temperature, Fuel rail pressure (diesel vehicles), Manifold absolute pressure, Engine RPM, Speed, Timing position, Air intake temperature, Mass Air Flow (grams/sec.), Throttle position, Fuel level, Battery voltage, Ambient air temperature, Transmission temperature. Along with the following diesel specific parameters: Pyrometer #1 & 2 (optional, probe sold separately), Boost, injection pulse Width, Barometer, Oil temperature, injection control pressure 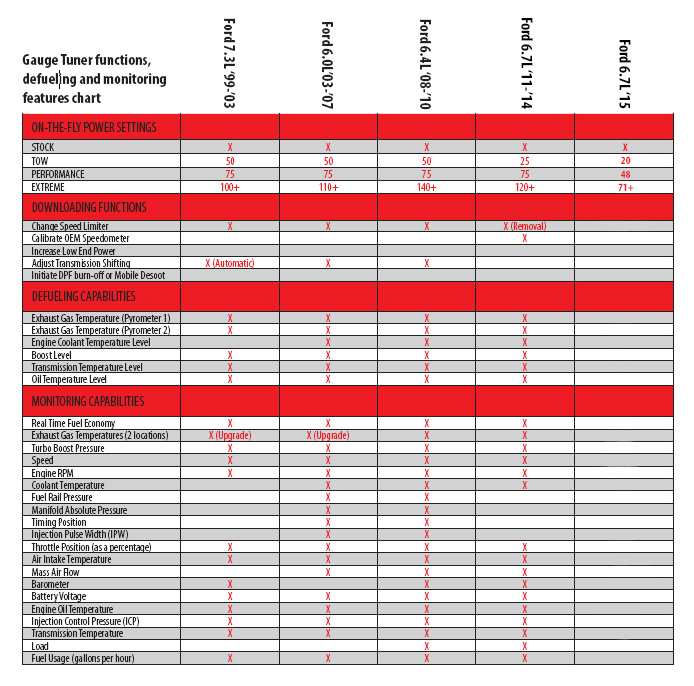 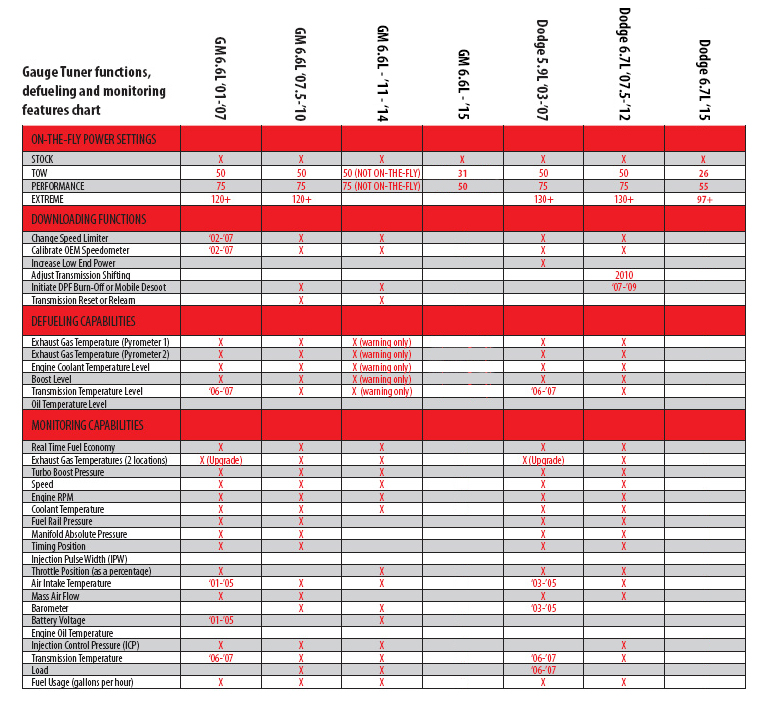 Not available for sale in the state of California

★★★★★ ★★★★★
3.7/5 Stars out of 38 Reviews
5 ★
20
4 ★
5
3 ★
3
2 ★
1
1 ★
9
2004 Cummins
★ ★ ★ ★ 4
Bennett (Wisconsin) | May 6th, 2021
Works good for the price, smaller than I assumed. Setting it up was a little confusing but after that it gets the job done.
Impressive but not without flaws
★ ★ ★ 3
Jamison (Washington) | April 9th, 2021
I'm extremely impressed with the power delivery and gauge layouts of the Bully Dog tuner. I run my truck in stock form 99% of the time but use "tow" mode when towing our 28' travel trailer. It makes a very noticeable difference when climbing hills at highway speeds. Of course I had to try the "performance" and "extreme" modes as well. Performance is a huge boost to power, extreme even more so, but I'm unable to use it since my clutch begins to slip. I don't think my clutch is bad since it tows our trailer just fine without slippage, I think the extra power is just too much for it. Enough of the pros though. A HUGE con is that when I was using the "safety" feature that keeps the tunes off until the truck reaches operating temp, my truck would reach the set temp, the tuner would switch out of safety mode, but inevitably, I'd stop at a stop light immediately afterwards, the temp would drop below the threshhold, the truck would shudder and throw a check engine code. I believe it was something along the lines of "fuel system overpressure." It did this a few times before I disabled the safety feature. It's only done it once since then, and it was right after startup. The truck fired up, and as soon as the tuner finished booting up, the truck shuddered and threw the same code. I don't know if it's doing damage to my fuel system when this happens, but it's enough to worry me.
Verified Buyer
1372548
★ ★ ★ ★ ★ 5
JT (Racine, Ohio) | April 5th, 2021
Absolutely love my programmer. I have already seen a significant boost in fuel mileage. I highly recommend this programmer
Pages 1   2   3   4   5

See what others built Submit your photo


The 50-state legal GT is essentially the same as the Bully Dog GT Diesel, but has an EO number that allows it to be installed on vehicles in California. Bully Dog's 50-State Legal GT is part of the company's commitment to compliance with legal standards. The 50-State Legal GT will be a major improvement to your vehicle with the same great features found on the GT Diesel 40420.

The Triple Dog Gauge Tuner or GT is four products in one; a vehicle engine tuner, monitor, gauge and diagnostic device all in a single unit. The GT dramatically improves the utility of your vehicle by increasing horsepower, improving fuel economy and providing a comprehensive set of monitoring features and diagnostic functions.

Can the dealer detect using the device? Will it void my warranty?
View Staff Answer
Answer


Most dealerships have no TRUE way of telling that the truck was programmed. It is highly recommended you return your vehicle to stock prior to going to a dealer for service to avoid any hassles or complications. Void your warranty? Legally, a vehicle manufacturer cannot void the warranty on a vehicle due to an aftermarket part unless they can prove that the aftermarket part caused or contributed to the failure in the vehicle (per the Magnuson Moss Warranty Act (15 U.S.C. 2302(C)) . For best results, consider working with performance-oriented dealerships with a proven history of working with customers.

What is the 50 next to tow and 75 next to performance?
View Staff Answer
Answer


The numbers displayed are referring to the horsepower increases associated with the settings.

View All
ASK A PRODUCT QUESTION

Ask a question about this product

Please allow up to 1 business day for reply.

Customers who bought this also bought

Have peace of mind knowing that you are getting the best price guaranteed by shopping with XDP.

Fitment verification applies to year, make and engine only. Individual details such as model, trim packages, build dates, and other factory options can change fitment and must be verified by customer.

This product is not legal for sale or street use in California. Certain aftermarket products are subject to governmental emission standards regulated by the California Air Resources Board. In order for these products to be legal on a specific vehicle in California, the part number must receive a CARB Executive Order (EO) number. This number makes the part legal for use only on specific years, makes and models of vehicles. A decal with CARB EO number for these parts must be displayed in the engine bay to satisfy smog inspection requirements.